A NASA scientist designed a ship that could theoretically travel at 'Star Trek' speeds. 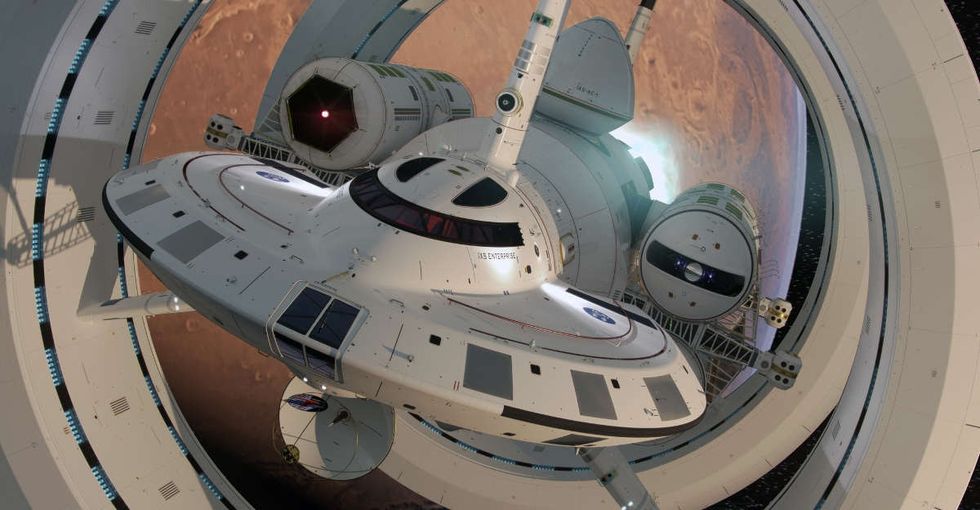 In 1957, Soviet scientists launched Sputnik — the first man-made satellite to successfully orbit the Earth — inspiring children around the world to grow up and become physicists and astronomers.

In 1969, astronauts Neil Armstrong and Buzz Aldrin took humankind's first steps on the moon, again inspiring children around the world to pursue careers in rocket science and engineering in order to follow them to the stars.

And ... while the U.S. space program has certainly seen some great success getting probes to take pictures of Pluto and stuff, in the 47 years since, we've sorta kinda hit a wall when it comes to sending actual live humans into space. The Challenger and Columbia disasters, the end of the Cold War, and periodic budget futzing have largely closed space off to the explorers and dreamers of America...

....unless they happen to be ridiculously rich adults.

In 2001, investment manager Dennis Tito paid $20 million to have exasperated cosmonauts fly him to space aboard the Soyuz TM-32, inspiring precisely no children anywhere to do anything.

And a trip to space — which once felt obtainable by any child in America with enough gumption, hard work, and grit — suddenly seemed accessible only under the ever-so-slightly less meritocratic condition of ponying up tens of millions of dollars.

Now that we've transformed space from "the final frontier" of our collective imagination into a playground for eccentric millionaires, how will we ever get the children of the world fired up about manned spaceflight again?

While Elon Musk and Richard Branson have been working on ways to send more hedge funders into low-Earth orbit, Harold White has been working on plans for an actual faster-than-light warp drive.

White, who's been working on the project for several years in his role as NASA's advanced propulsion team lead, asked artist Mark Rademaker to help design a prototype for a potential real-life warp ship.

And boy did they ever design a prototype:

The name of the (theoretical) ship? The IXS Enterprise, after the "Star Trek" ship of the same name.

(I know. I didn't think there were any "Star Trek" fans at NASA, either. Who knew?)

If it works, and it's a pretty big if, the ship could send humans to distant solar systems within weeks, rather than the current working timeline of centuries or millennia.

White's proposed warp drive is obviously a total moonshot, but there is a way it could possibly sorta kinda maybe work.

"A warp ship such as the IXS Enterprise could allow travel to interstellar space in a matter of weeks rather than, say, centuries. And the science behind why it might be possible is truly mind-boggling.
An over-simplified explanation is that the concept seeks to exploit a "loophole" in Albert Einstein’s theory of relativity that allows travel faster than the speed of light by expanding space-time behind the object and contracting space-time front of it."

While the research is legit, White told the Post that he and Rademaker released the prototype image primarily to help convince kids that jobs in STEM fields are actually awesome and totally not boring.

And, well ... mission accomplished. Just look at that thing.

Is it enough to give young people hope that they might yet witness a space travel breakthrough of the kind their parents and grandparents were lucky enough to live through?

Even if the IXS Enterprise is still science fiction, it's grounded in serious math and physics (you can watch White explain it in greater detail here — and he's way better at it than I could ever be).

Perhaps more importantly, it gives us — kids and adults — something to actually legit aspire to — something the U.S. space program hasn't really had since JFK's moon challenge over 40 years ago.

And that aspiration is more than just the dream of one day having slow-motion punch fights with scaly aliens in leopard print togas, though it definitely includes that too.

The IXS Enterprise prototype is a symbol for the hope that one day, in our lifetimes, humankind will travel between the stars at incredible speeds.

And we better hope that day comes to pass! Because the alternative ... is only this guy gets to go to space:

Ach! Who opened the borscht packet in the life support module?! Who ... oh ... No!!! Photo by NASA/Wikimedia Commons.

And space is for all of us! Not just rich guys (though once we get warp drive, the rich guys are invited too).

For the love of God, Harold White, and NASA, science on.