A camera captured just how different California looked during and after its drought. 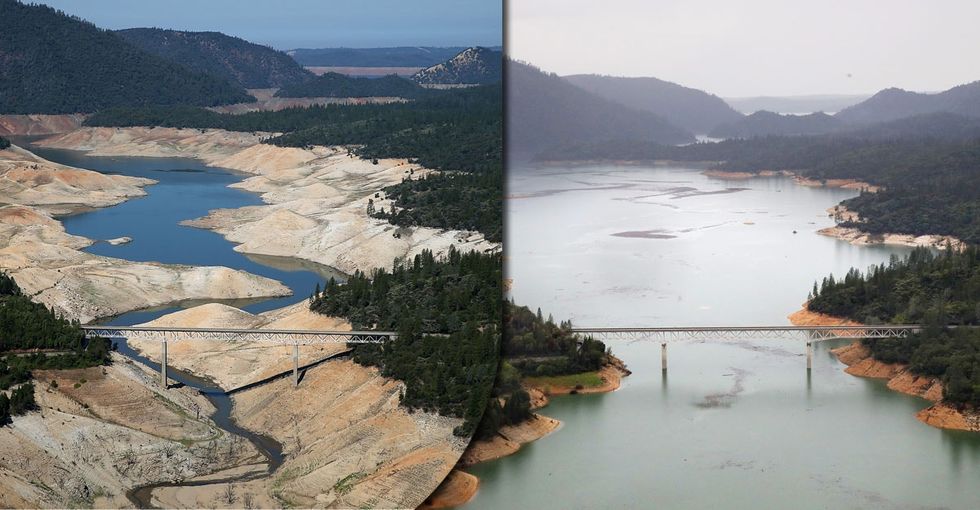 On April 7, 2017, Gov. Jerry Brown officially declared the state's three-year-long state of emergency — brought on by a devastating, five-year drought — over in all but four counties.

In the span of a single rainy winter, California's parched moonscapes were reborn in mud and greenery, bringing sudden, overdue relief to most corners of the long-suffering state.

Photographer Justin Sullivan captured the change in a series of astonishing photographs taken three years apart in the same locations and put the magnitude of the recovery in perspective.

1. In Oroville, a lake that had been reduced to a babbling brook by 2014 has officially been re-lake-ified.

2. Boats in Lake Oroville's marina are finding they have a little more room to maneuver these days.

3. Dogs in San Francisco's Bernal Heights Park have a more vibrant landscape to nose around in.

4. Meanwhile, a cemetery in the Presidio got most of its color back.

6. At Samuel P. Taylor State Park in Lagunitas, the threat of forest fire is finally ebbing.

7. In El Dorado Hills, stranded boats are finally returning to the business of floating on water.

8. And in Nicasio, ranches are looking a whole lot more postcard-worthy.

The end of the water shortage hasn't been unconditionally good news because of the severity of the weather that brought it about.

Since the beginning of winter, communities across the state have been battered by storms causing mass power outages and worse.

Here's what happened to a spillway at Lake Oroville after a mudslide.

In February, landslides damaged the Pfeiffer Canyon Bridge in Big Sur beyond repair, splitting the town in half, closing businesses, and forcing some residents to airlift in supplies.

Environmental scientists believe drought boom-bust swings like this are a byproduct of climate change.

In addition to its impact on infrastructure, a recent Kansas University study determined this "weather whiplash" can cause severe problems for drinking water quality and devastate ecosystems.

This whiplash is why Brown is urging the state continue to conserve water as if the drought were still going on.

With the danger of harsh and sudden water shortages increasing with changes to the climate, the governor plans to retain many of the water-saving regulations that went into effect during the three-year emergency.

If you live in California, and you worry about your future ability to hydrate, you can call your state legislators and ask them to make the laws permanent.

If you live elsewhere in the country, you can call your elected officials to, you know, make sure they work as hard as they can to make climate change not a thing in the first place.

With the region finally getting back to normal, it's natural for residents to want to hope for the best.

The best way to realize that hope might just be to prepare for the return of the worst.