19 things that happen when the government shuts down. 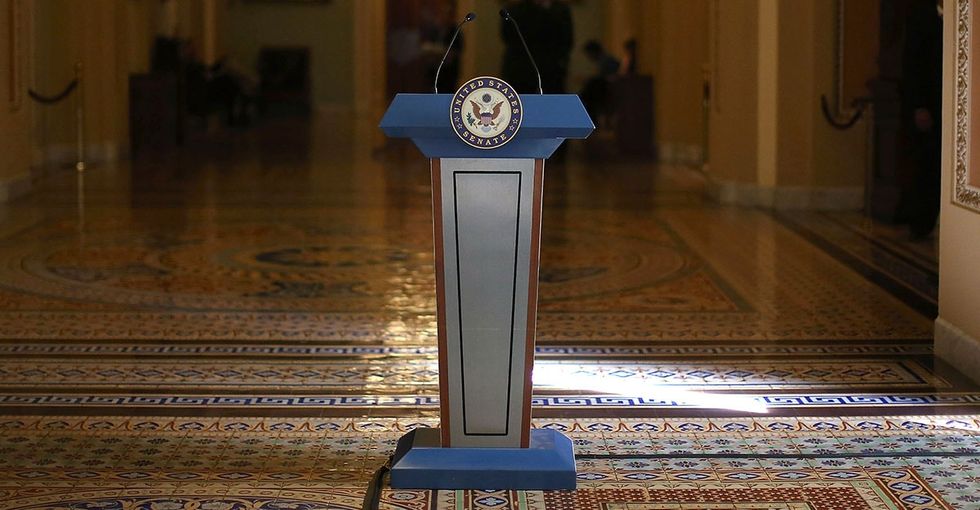 On May 2, 2017, President Trump tweeted that maybe what the government needs is "a good 'shutdown.'"

It would be to "force a partisan confrontation over federal spending," according to The New York Times — as if the American government were a kid who needs a timeout. But that's just not how government works. When politicians can't get their act together, the rest of the country suffers.

How do we know this? Because in 2013, it did shut down. For 16 days. It, uh, wasn't great. If you (and the government) need a reminder of what's at stake, here are 20 things that happened to real people because of it:

One U.S. Capitol employee took a job as a middle-school janitor, according to the Washington Post. Another family had to lay off a reading specialist they hired for their autistic son. At its peak, the shutdown put about 850,000 government jobs on hold.

According to the Los Angeles Times, Cleo Tung and Matthew Locascio had to reschedule their wedding after the government closed Yosemite National Park. Another group was told their reservation to raft down the Grand Canyon — a plan 18 years in the making — wasn't going to happen.

3. National wildlife refuges closed too. Officials had to cancel a wild pony roundup on the Virginia coast.

Each year, workers round up the wild ponies on Assateague Island, conducting vet checks, giving immunizations, and collecting and selling new foals. The event had to be cancelled because the national wildlife refuge was closed. The same park closure also stopped a yearly peregrine falcon survey.

4. Outdoor-dependent businesses near the parks and refuges suffered greatly.

5. If Americans thought they'd hit a museum instead, tough luck. National museums and monuments were closed too.

The shutdown affected the Smithsonian museums and national monuments such as the Statue of Liberty and the Lincoln Memorial.

6. But it didn't stop 92 veterans from visiting the World War II Memorial.

7. And this red-blooded American helped mow the Lincoln Memorial's lawn.

Chris Cox from South Carolina took it upon himself to mow the lawns and empty the garbage cans on the National Mall. He refused donations, saying the point was to send a message to the government.

The shutdown locked about 50,000 families in the state out of the Special Supplemental Nutrition Program for Women, Infants, and Children, which provides vouchers to low-income moms and families.

9. Homeowners at Lake Mead were told to vacate.

Joyce and Ralph Spencer, whose home is located on government land, were given 24 hours to find new accommodations, according to the Washington Times.

10. $4 billion dollars worth of tax refunds were delayed.

Tax refunds aren't just a nice bonus — they're money that's legitimately owed to workers and families. Checks had to be delayed because of staffing issues at the IRS.

When the government shut down, it stopped providing insurance rate and price predictions to farmers. Combine that with a frozen-at-the-time farm bill, and it's understandable why farmers like Val Wagner said they were having trouble planning the next year's crop.

12. Potentially life-saving clinical trials got all scrambled up.

The shutdown furloughed about three-quarters of the National Institutes of Health's staff, putting a freeze on new clinical trial enrollments. About 200 patients a week had to be deferred, wrote the L.A. Times.

13. Alaskan crab fishermen were idled on the docks, waiting for NOAA permits.

Crab fishermen depend on the National Oceanic and Atmospheric Administration to set quotas and issue licenses. The shutdown meant the crews had to sit around waiting.

JetBlue and US Airways couldn't get new Airbus planes because the Federal Aviation Administration had furloughed the workers who certify them for flight.

15. In Daphne, Alabama, a domestic violence shelter had to ask the city for emergency funding.

The city came through with funds for the The Lighthouse, but not all shelters were so lucky. The White Buffalo Calf Woman Society, which serves the Rosebud Reservation in South Dakota, said they had to turn at least four people away.

In Fort Yukon, Alaska, for instance, the political brouhaha shut down jobs, scholarships, and aid programs.

A Congolese doctor, applying for U.S. asylum after he spoke out about human rights atrocities, had his case frozen. The already backed-up system became even slower after courts shut down, a situation one lawyer called "a nightmare."

18. An investigation into Dartmouth College's sexual assault policies ground to a halt.

The college was under investigation after students complained the college hadn't been reporting or prosecuting sexual violence on campus. The shutdown paused the investigation.

With nothing else to do, furloughed employees grew beards and posting them on social media, leading to what must be one of our country's lowest moments: the creation of the #ShutdownBeards hashtag.

Ultimately, the 2013 shutdown cost the country about $24 billion.

According to the Standard & Poor's rating agency, the shutdown ended up draining $1.5 billion a day from the American economy.

So no, Mr. President. A government shutdown isn't a good thing.

These are just a handful of the shutdown's effects. From passport applications to airplane accident investigations, we depend on the government to do its job. When politicians play games, real people get hurt.