This poet laureate will make your brain work. Plus 4 other facts about his life and work.

Gosh, this guy is impressive. 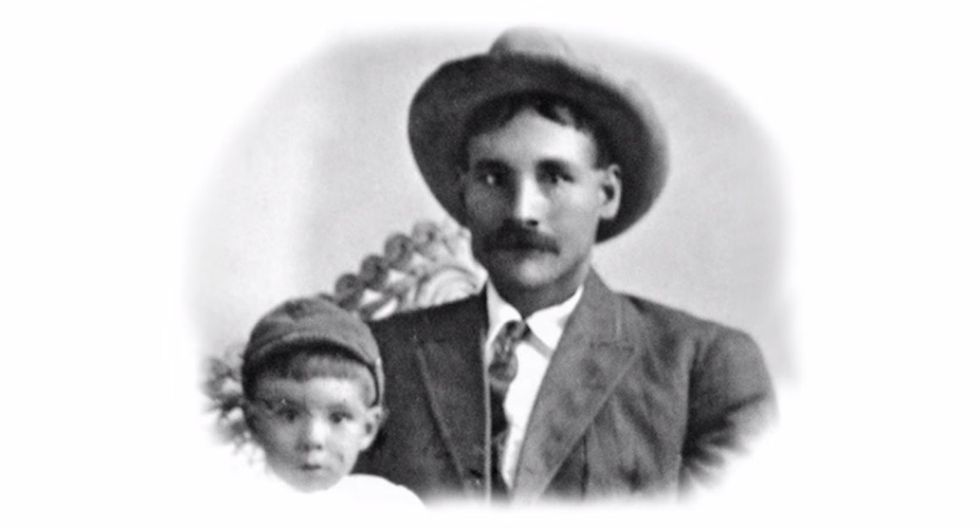 Who'd have thought the son of two migrant workers could rise to the pinnacle of poetry honor?

The United States Library of Congress has appointed Juan Felipe Herrera national poet laureate. And, wow, he is extraordinary.

As a child, Herrera lived a nomadic life out of tents and trailers on farm roads throughout California. His folks, both migrant farmworkers from Mexico, moved with the seasons of agriculture for the often hazardous and thankless work in the fields.

Herrera and his father. Image via University of California Riverside/YouTube.

Despite steep social and economic odds, Herrera has achieved the top of his art on a mountain of original talent, unshakeable work ethic, and passion. Librarian of Congress James H. Billington said Herrera was selected as poet laureate because his poems “champion voices, traditions and histories, as well as a cultural perspective, which is a vital part of our larger American identity."

Here are five great things to know about the nation's premier wordsmith:

1. He WILL make your brain work.

Herrera's writing is riddled with cultural references and mind-scrambling metaphors, but the images he conjures can launch even the least versed of his audience into a state of wonder.

2. His poems are meant to be heard.

Many of Herrera's poems were written for spoken delivery. In an interview with the Los Angeles Times, he spoke of his humble beginnings with spoken word:

"I used to stand on the corner in San Diego with poems sticking out of my hip pocket, asking people if there was a place where I could read poems. The audience is half of the poem."

In this video, Herrera reads excerpts from a few of his poems, beginning with "187 Reasons Mexicanos Can't Cross The Border," a call-and-response piece that involves the audience in an affirmation of each line of the story.

Herrera's contemporaries are pretty excited about his knack for connecting young people to poetry. And with the rising popularity of spoken word among American youth, his appointment comes at a great time.

Herrera with a bilingual class in 1984. GIFs via Rick Tejada-Flores/YouTube.

Robert Casper of the Poetry and Literature Center at the Library of Congress is stoked about Herrera:

"He speaks poetry in a way that I think is super-inspiring. ... He's the kind of poet who gives you permission to love poetry, to be excited about it, to be energized by it. To think that it's something freeing and fun but also relevant to the issues we face, the challenges we have; to understanding the world we're in."

4. He's an icon of recognition for a growing community.

Herrera is the first Latino — Chicano (Mexican-American), to be specific — to ever receive this honor. Latinos, who represent 17% of the U.S. population, are an important part of the country's cultural tapestry.

As much of Herrera's writing focuses on working-class Latino experiences, a lot of people are very excited to see their heritage recognized in a culturally significant way.

5. He cares about the world and all its people.

“Waking up is the biggest thing. I'm a political poet — let us say a human poet, a poet that's concerned with the plight of people who suffer. If words can be of assistance, then that's what I'm going to use."

And if that's not reason enough to love him, check out this video playlist of readings and interviews with Herrera. It won't take long to make you a fan. Then you can send him a congratulatory tweet to what has to be one of the best handles in the Twittersphere: @cilantroman.