Steve McQueen was the King of Cool. But do you know how he died? 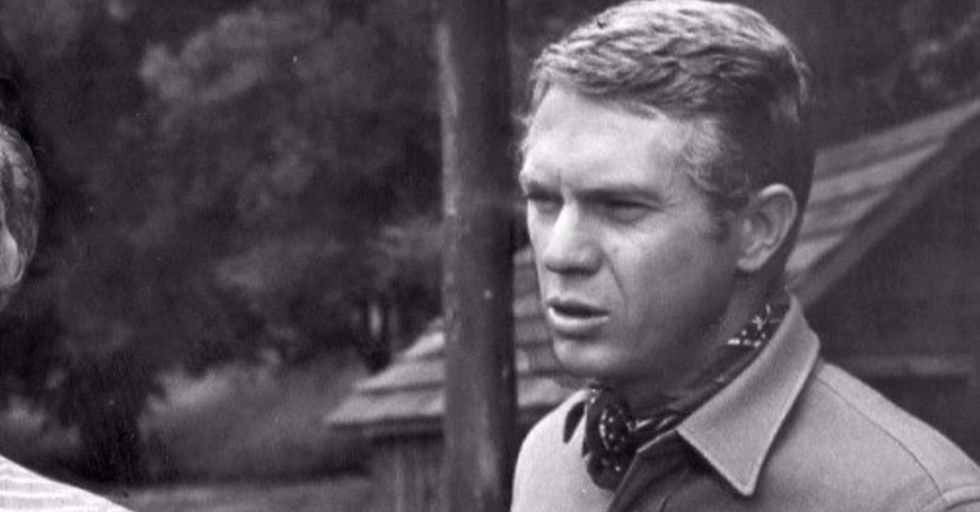 Do you remember the actor Steve McQueen?

I mean, who doesn't remember Steve McQueen? OK, maybe people born after he died in 1980 wouldn't remember him. For those people, I will speak in the universal language of pictures. Spoiler alert: He's pretty cool.

Steve McQueen being cool on the set of "Wanted: Dead or Alive":

Steve McQueen being cool with his Jaguar and his horse, NBD:

Steve McQueen being cool while looking straight into my soul:

Steve McQueen being cool doing his own motorcycle stunts for the movie "The Great Escape":

There is even a song about how cool Steve McQueen is. You can listen to it right here. It goes:

"I wanna be, the coolest man you've ever seen. I just wanna be your Steve McQueen."

Hopefully we are now all on the same page.

Steve McQueen was the King of Cool.

He was an avid race car enthusiast and earned a fair bit of cash while motorcycle racing in the 1950s. In 1974, he became the highest-paid movie star in the world. Everything he did was just. so. cool. Acting, racing, smoking cigarettes (which, let's be real, is not cool, but people thought it was cool, so we'll give him a tiny break).

But McQueen died of lung cancer in 1980.

BUT WAIT — there's more to it.

In 1947, McQueen joined the Marine Corps, but he didn't totally lose his rebellious side.

Steve McQueen being cool playing a guy in the Navy in "The Sand Pebbles" in 1966.

After running off with a girlfriend for a couple weeks while he was a Marine, McQueen was put into the brig and later spent quite some time scraping asbestos off pipes on a ship. He was also exposed to asbestos while wearing fire-retardant racing suits.

In 1979, McQueen was diagnosed with malignant pleural mesothelioma.

"Ugh," you say. "That is not what is supposed to happen to totally cool Steve McQueen, because asbestos is very uncool."

You're right. Asbestos is decidedly not cool.

What could be less cool than that?!

But that's the thing about asbestos: It's legal, still used in the United States, and kills the cool dudes.

Asbestos did not care how cool McQueen was, how famous he was going to be, or how much of a movie star icon he would become. Asbestos is horrible and scary for everyone, and dozens of countries all over the world have banned it — but not the U.S.

In 2012, the Asbestos Disease Awareness Organization awarded McQueen the Warren Zevon "Keep Me in Your Heart" Memorial Tribute Award. Below, you can watch the tribute video made for that occasion. It has an interview with McQueen's widow, Barbara, as well as a quote from Jordan Zevon, a spokesperson for the Asbestos Disease Awareness Organization.

As Zevon says, "We're celebrating a tough guy who died from this disease that even takes the tough guys away from us."