See gorgeous photos of the ranch this couple donated to help people with PTSD. 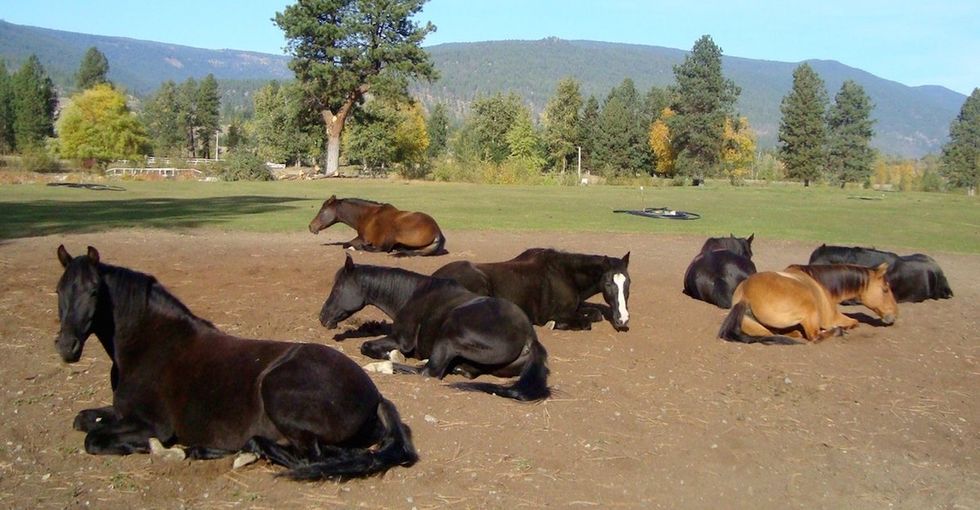 When one of his horses crashed into him without warning, Rick Wanless had no idea how badly he was hurt.

Wanless, who is in his late 70s, was working on his ranch in British Columbia four years ago when the collision happened. It didn't seem so bad at first, but the pain was intense. He had broken his pelvis and suffered severe internal injuries.

A team of paramedics rushed him to a local hospital. From there, he was transported by medevac to a trauma center in Vancouver.

Luckily, Wanless made a full recovery. And today he's riding horses again without fear, something he's loved doing his entire life. He credits those amazing first responders with making that possible.

Wanless and his wife, Donna, decided there had to be a way for them to give back.

Rick and Donna. All photos by Rick Wanless, used with permission

"I realized that they have a pretty demanding job and a great many of them have PTSD (post traumatic stress disorder)," he said. "The need to help them seems to be overlooked when they're so busy helping us."

So he started reading. And as he read, he found dozens and dozens of articles praising the therapeutic value of farms and ranches. And it's true, studies have shown that exposure to nature can be great at easing the symptoms of PTSD, which include intense fear, anxiety, insomnia, and many others.

As he read, Wanless looked around the serene, 25-acre ranch he and his wife call home and came to a big realization.

It was the perfect place for healing.

Rick and Donna offered up their ranch to Honour House, an organization that provides free housing and support to Canadian veterans and people who have served who have PTSD.

When most people want to give back, they donate money. Rick and Donna decided instead to open up their home to people in need — to share their little slice of nature with people who desperately need to get away from the triggers and stresses of everyday life.

"I imagine a lot of people leave stuff in their wills, but they never know if it comes to fruition or not," he said. "This is actually something we can see happening."

The property will be called Honour Ranch, and small numbers of individuals suffering from PTSD will be able to visit and work with the horses...

...watch for deer, bears, and other wildlife...

...boat or kayak on the pond or nearby river...

...or just camp out and enjoy the tranquility.

Rick and Donna will continue to live on the ranch, but they won't have a great deal of interaction with their guests. And that's the point.

He said they have virtually no neighbors, making the property a perfect place to be alone in nature.

Of course, rest and recuperation is only one aspect of recovery. Honour House will bring in treatment professionals as needed to work with visitors to the ranch. The program is expected to kick off in Spring 2017.

In the meantime, Rick and Donna just hope their kindness will inspire others.

"We've had a wonderful life. We haven't had any hardships," he said. "If [others like us] can be inspired by what we're doing and want to help out in some way in their community, that would be wonderful."