A dad took his 2-year-old's most memorable words and illustrated them beautifully. 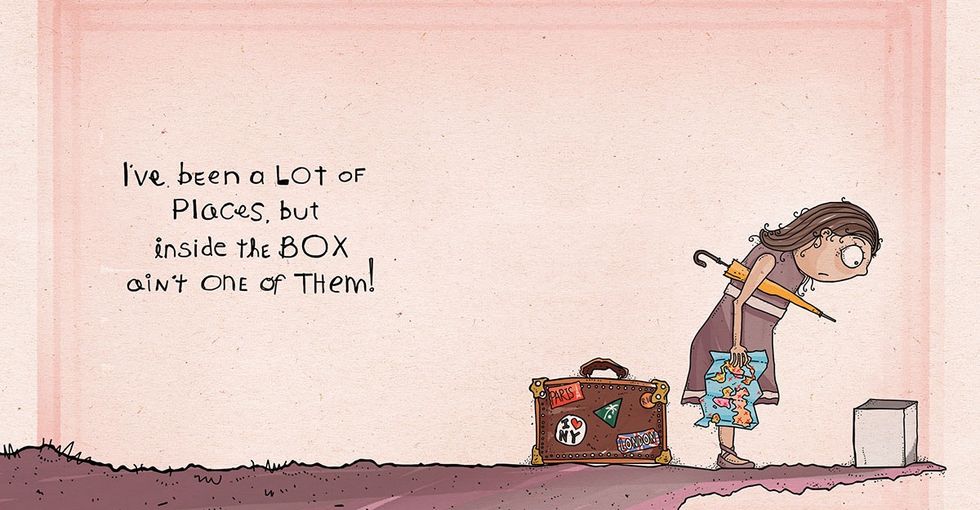 If you hang around them enough, they'll have you talkin' wacky, too.

Lifelong artist Martin Bruckner realized this strange phenomenon a few years ago when his daughter, Harper, 2 at the time, was having a field day with her dinner. His wife barely looked up from her plate as she said, plain as day, "Please don't put spaghetti between your toes."

Later that night, as Bruckner got Harper ready for a bath, he casually inquired, "Did you just drop your cheese in the tub again?"

But it wasn't a moment of deep depression. It was pure joy, and he wanted to find a way to capture as many of these fleeting moments as he could.

All images by Martin Bruckner, used with permission.

Her words instantly brought unique and unforgettable visuals to mind, and he began scribbling them down so he'd never lose them.

At first, Bruckner only collected eight or so drawings and put them in a book for his wife as a Mother's Day gift.

When he put a few of them up on a Facebook page, aptly named "Spaghetti Toes," everything changed.

His work went viral, and soon he was fielding emails from a notable book publisher.

It wasn't just Bruckner and his daughter's words that filled the book, which just recently hit shelves. He also drew on custom designs he'd been making for fans all over the globe.

Turns out, parents everywhere were pretty familiar with the unique and twisted brand of honesty all toddlers possess.

While days with young children can be long and sometimes frustrating, these tiny and hilarious moments are part of what makes the whole thing worth it.

"The world we live in today ... I think everyone can agree it's not great," Bruckner says. "The news brings you down. But even people that don't have kids, they say, 'Thank you for this.'"

"It brightens their day," he adds. "That means a lot."

As for Harper, now 5 years old, Bruckner says the bizarre non sequiturs are getting fewer and farther between. But the gems are still there.

Just the other day, Bruckner overheard her giving her barbies an Easter pep talk. "Ladies, we have all day to have fun," she said. "But Jesus is coming soon, and this house is a mess."

Bruckner doesn't sound quite ready for these moments to end.

For the rest of us, it's nice to be reminded to enjoy the wonder and unconstrained imagination of our kids while we can.

Writing it down, though, is one way to make it last forever.