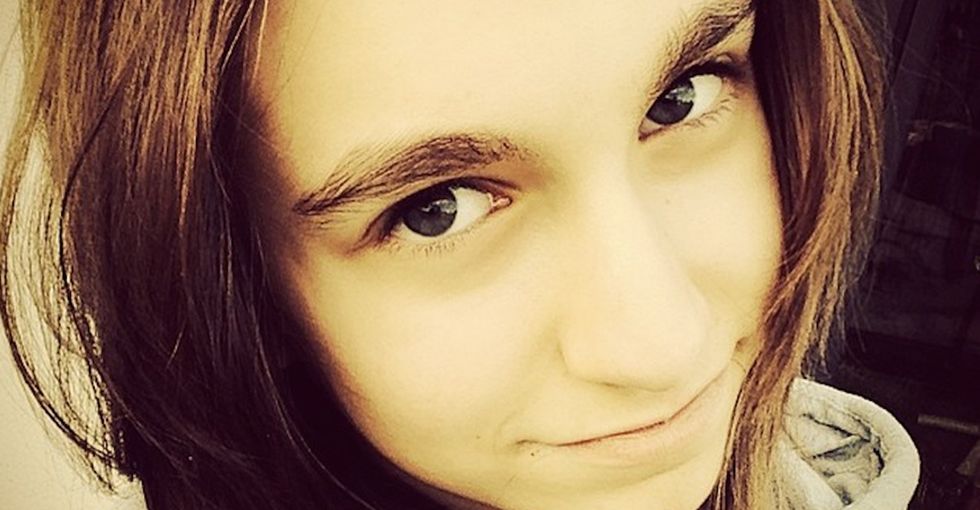 Meet 16-year-old Joanna Wirażka, part of a new generation of artists who use the Earth as their canvas.

All photos by Joanna Wirażka, used with permission.

Traditional art techniques are beautiful, but they can sometimes have an ugly side. Toxic paint thinners and solvents. Aerosol cans. Certain glazes used in ceramics. In other words, if it smells like it might be bad for the environment, it just might be.

But there's some good news!

In recent years, we're seeing more and more artists explore new mediums that reduce their environmental impact, like salt, ice, and even trash. It's leading to some incredible work.

The Polish artist told Upworthy via email that she painted her first leaf on New Year's Eve of last year. While all of her friends were getting ready for a party, she spent the whole day painstakingly drying, painting, and coloring — inspired by the brilliant hues of the fireworks in the night sky.

She never thought anyone would care until, she says, a popular art blog shared an Instagram photo of that first leaf, and she suddenly gained thousands of fans.

The overwhelming response inspired her to do more work with leaves.

Good thing she did because the results are absolutely incredible.

Joanna says this one depicts "a magic night in New York."

"Try to find real art everywhere and let it inspire you," Joanna says.

A street in New York.

She collects the leaves from a park near her house then sets them inside a book and waits for them to dry.

From there, she paints them black using water-based acrylic paints before adding in her signature explosion of color.

She says she's fascinated with the bright lights of New York, London, and Los Angeles; cities she hopes to see in person one day.

That's why they show up so often in her work.

But these aren't just pretty pictures of far off places to her. These paintings have a powerful message.

"Around the world on a leaf."

"I wanted to say that we don't have to cut trees to have paper for drawing or painting," she said.

Joanna calls this her "green leaf," showing the effects of deforestation.

"I think it's important to raise people's awareness about the really bad condition of our planet."

"Loneliness can be beautiful."

Not bad for a 16-year-old who, by the way, is completely self-taught.

Bravo to Joanna for bringing fresh ideas and a powerful perspective to the world of painting.

No wonder people are loving her work.

"All I need is this paradise on a leaf."

When we asked Joanna what else she wanted people to know about her, she told us she's still figuring out whether she wants to pursue a career in the arts.

She said she's also considering going into the sciences — biology and chemistry, to be exact. If you ask me, her future looks bright no matter which path she decides to take.

We can't wait to see what Joanna and other young artists like her come up with next.