Try not to jiggle while watching these amazing bladeless wind turbines. 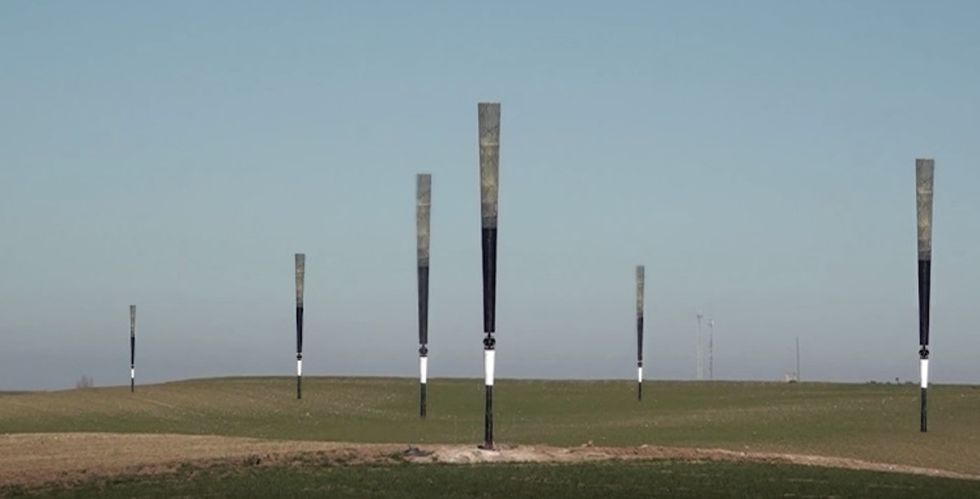 This article originally appeared on 05.12.16

The wind: A cool breeze, a breath of fresh air, a pollen delivery system.

When it's not inverting your umbrella, knocking over your pitcher of iced tea, or sadistically ushering a balloon away from a crying child, the wind is capable of doing some pretty powerful stuff.

Most notably, the wind can generate electricity, which, for the most part, involves turbines that look like this:

You've seen them, I'm sure. Those giant, futuristic looking propellors that slowly rotate and are the perfect tension-driving backdrop for a helicopter chase scene?

A startup in Spain called Vortex, however, has recently come up with a new design for the turbines. It looks like this:

It's called Bladeless, and it's a wind turbine with — you guessed it — no blades.

The bladeless turbines are massive poles jutting out of the ground. Because they're thinner than a regular wind turbine and have no blades, more of them can fit into a space, meaning more electricity can be generated while taking up less real estate.

So how does the bladeless turbine generate power?

Get this: It freaking jiggles.

Here it is from a different angle:

You're jiggling now too, aren't you? Come on, I know you are.

Besides being contagious and relatively adorable, as far as wind turbines go, that jiggle motion is actually based on a fascinating branch of science called aeroelasticity.

Aeroelasticity is the study of how elastic things move when exposed to constant energy — like how a bungie cord might fare in a tornado.

A good example of aeroelasticity-gone-wild happened in 1940 at the Tacoma Narrows Bridge in Washington state, when it was blasted with winds up to 40 mph. The suspension cables absorbed the impact but made the bridge vibrate and undulate, causing a positive feedback loop known as an aeroelastic flutter, where each vibration made the next vibration even worse.

The whole bridge started swinging wildly out of control, and then...

The designers of the bladeless turbine also learned something from the Tacoma Bridge disaster.

The bladeless turbine design actually captures the power of aeroelastic flutter and uses its magnified vibrations to create power from less wind than the old turbine designs could.

The company says that its design is 40% cheaper than traditional turbines because the huge blades those require are expensive. Plus, they expect upkeep to be cheaper since the bladeless turbines have fewer moving parts. Bladeless turbines will also be quieter and create less wind disturbance, which are both popular arguments against bladed turbines.

All of this is to say — we humans are getting better and better at harnessing the power of the wind.

Here in the United States, we're actually better at harnessing the wind to power people's homes than you might expect. There are currently over 48,000 wind turbines generating 74,512 megawatts of electricity in nearly every single state, which made the U.S. one of the top countries in wind energy in 2015.

All that clean energy, here and around the world, is (slowly) helping us reduce carbon emissions and fight back against climate change, and innovative ideas like the bladeless turbine are constantly seeking to make that process easier.

Maybe one day you'll look outside and see a hundred bladeless turbines jiggling happily away in the wind. And when, or if, that day comes, I bet you'll be jiggling too.