This woman turned her 'date from hell' into a beautiful rallying cry for women everywhere. 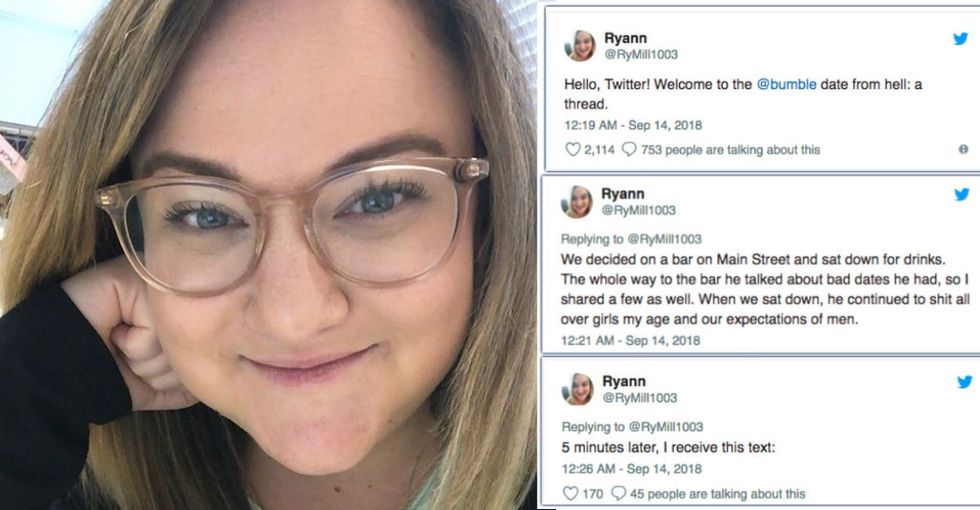 This article originally appeared on 09.17.18

We've all been on bad dates before.

I still remember the guy who adopted a British accent halfway during our first date and then pretended he had no idea what I was talking about.

Or the dude who shot me a multitude of horrified glances as I sang through the entirety of "Dreamgirls." Wait, maybe I was the bad date that time? (Does it help if we were the only ones in the movie theater?) (Okay, sorry.)

Few of us have had dates as bad as Ryann Miller. Her date wasn't just awkward or a little bit rude. He was the kind of shamey mess that makes people grateful to be single.

Miller, a new California transplant, went on a date with a guy she met on Bumble. But while she was ready for a nice night out with a single in her area, this man (let's call him Brandon because that's his name) decided that he had other plans.

In a twitter thread that documented the date from its humble and unpleasant beginnings to its embarrassingly disastrous end, Miller laid out all of the red flags that Brandon exhibited — from making things all about himself, to being rude to the server. (Which is actually a really great way of telling if someone's a quality person. Jot that down for your next date: If they're mean to the waiter on your first date, just imagine what they'll be like when they're not putting their best foot forward.)

The red flags just keep piling up, don't they? There's nothing that tells someone you're "interested in their opinion" and "open to a variety of viewpoints" than asking if you've done something wrong, being presented with evidence of your bad behavior, and then going on to dismiss it out of hand because people just can't handle your "straight shooting" and "brutal honesty" and "eccentric sense of humor" or whatever else we're using to justify our lack of social skills and vehement refusal to do anything about them.

The beginning of the date was bad, but what happened next was downright illegal. And that's not even the worst of it.

After being subjected to Brandon's personality for an entire dinner, Miller was overjoyed when he ventured off to the bathroom for a second. But then he never came back.

First: The dine-and-dash is a crime that comes with penalties in California and the fact that Brandon stuck Miller with a $50 bill (when she writes that she only had a $6 beer) is a huge problem.

But Miller isn't particularly worried about that. In fact, over DM she told Upworthy that she blocked Brandon on all forms of social media immediately after their date. And while she had to ask her sister and her sister's best friend help her pay the bill, it's a small price to pay for never having to see this guy again.

Second, and most importantly: I don't think I'm going out on a limb when I say that Brandon's message to Miller is one of the most insulting things many of us have ever read.

And Miller isn't alone. Based on the overwhelming support she's been receiving, it's clear that this kind of shaming, misogynistic behavior is not limited to just this one bad date. It happens every day and it's got to stop.

Miller had an important message for anyone who may have dealt with anything similiar:

"I didn't do this to shame him," Miller told Upworthy.

"This wasn't for revenge, I really just wanted to remind all the girls out there that we don't have to put up with anything we don't deserve. I should have gotten up and left way before it got to that point."