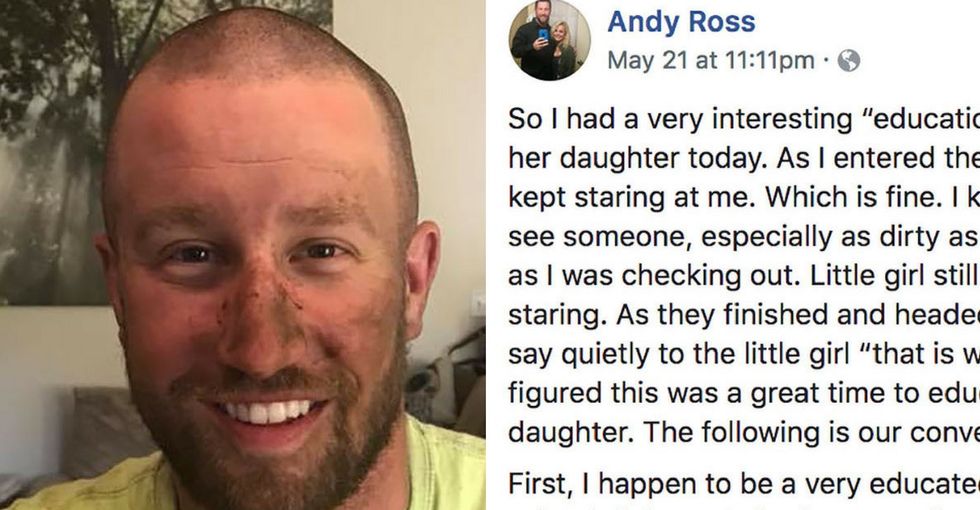 If you're a young kid, seeing a tattooed, dirt-covered man might make you do a double take.

Such was the case for a young girl in a Washington store. When construction worker Andy Ross walked to the store's checkout line with dirt all over him after a long day at work, he noticed the young girl's stare.

Knowing that children are curious and often stare at people, Andy paid her no mind. That is, until the mom and her daughter began walking out.

What Andy had expected to be a mundane trip to the store turned into a teaching moment about class, appearances, and creative expression.

In a Facebook post that's since gone viral, Andy explains overhearing some insulting words from the child's mother about his appearance.

"As they finished and headed towards the door, I hear her mom say quietly to the little girl 'that is why you need to stay in school.' I figured this was a great time to educate this mother and her 7/8 year old daughter."

Tattooed and muddy, Andy knew the mom was referring to him.

Instead of yelling or getting aggressive, Andy used the opportunity to talk to the mom and share why we shouldn't judge a book by its cover.

This mother assumed things about Andy based on his appearance, so he broke it down piece by piece to explain exactly why she was wrong.

So I had a very interesting “educational" conversation with a woman and her daughter today. As I entered the store...
Posted by Andy Ross on Monday, May 21, 2018

Firstly, he notes, he's quite the outdoorsman. As the co-owner of Evergreen State Outdoors, Andy is often pretty dirty after a long day at work, an aspect of the job he truly enjoys.

He went on to defend his tattoos, a piece of his identity that he says not only represents his time in the service but also the importance of creativity.

"If you are telling your daughter to stay in school because I have tattoos up and down my arms, that will actually suppress her creativity and potentially hinder her imagination as she develops," Andy said.

He also made a really good point about conflating one's appearance to their education level.

"I happen to be a very educated dirty man," Andy wrote. "I not only have a high school diploma, I also have a college degree and many medical certifications. So assuming that I am uneducated because of my appearance is actually quite ignorant in itself."

But even though he is a college graduate, Andy notes, it shouldn't matter whether he's educated or not — blue-collar work is valid and deserves our respect.

Work that doesn't necessarily require a college degree — such as construction, maintenance, warehousing, and firefighting — matters just as much as other types of work. There are about 19.6 million blue-collar jobs in the United States filled by a diverse group of hard-working Americans.

The woman who assumed that Andy was uneducated happened to be wrong, but her comment revealed her bias against blue-collar workers — a bias that, unfortunately, many Americans hold.

"People need to learn that blue collar workers are just like everybody else they meet in the world," says Andy in a message to Upworthy. "Some have degrees, some are borderline genius, [and] some have been in trouble. They are from all walks of life and all have a story to tell. So before you assume that this dirty, farmers-tanned man or woman is unintelligent, pause and think."

Ross's experience shows that we shouldn't be vilifying certain types of work to our children. We should be teaching them to respect and appreciate hard workers in all industries.

Granted, every parent gets to decide how to parent their child and what lessons they teach them.

Many parents, understandably, just want the best for their kids. But this desire to lead children to their best lives shouldn't come at the expense of devaluing someone because they don't meet antiquated standards of acceptable appearances.

It is absolutely possible to teach children good morals and values while also allowing them to pursue a variety of career options and safe and ethical ways to express themselves. Respecting those around us, even when they look a little different, helps to foster a more understanding and compassionate society.

And let's be honest, who doesn't like to get a little dirty sometimes?