This 86-year-old learned how to knit so he could make caps for premature babies. 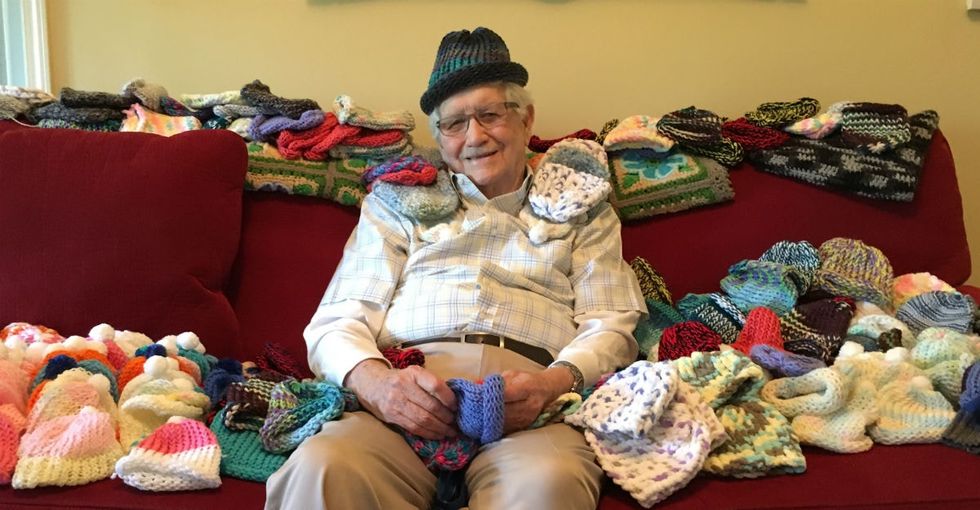 Dogwood Forest, a senior living community in Georgia, wanted to lend a helping hand to local families who needed it.

Nearby Northside Hospital Atlanta needed caps for premature babies staying in its neonatal intensive care unit (NICU). Oftentimes, premature babies struggle to stay warm, so they're kept in incubators with a comfy hat fitted on their heads. These caps are important.

The residents at Dogwood had been happy to help fill the little hat void, knitting dozens of hats for the NICU. And Ed Moseley, an 86-year-old who thought the initiative would keep "the old people out of trouble" was one of them.

But there was just one problem when the project started: Ed couldn't knit.

"I told my daughter about it, and I said, ‘How can I knit? What do I need to do?’" Moseley told the Atlanta Journal-Constitution. "And bless her heart, she went to Jo-Anns [Fabrics] and got a kit, yarn, and instruction kit for me. So I started slowly and learned it just takes patience."

Slowly but surely, Ed got the hang of it. His first cap took several hours to make. But after he got into a groove, he could churn one out in no time.

"I followed the instructions, and after two or three attempts, I started making fairly good caps," he told Inside Edition. "We started filling up my couch with caps, and then all of a sudden, caps started coming from various places."

His creations contributed to the more than 350 caps the senior center dropped off at Northside Hospital in Atlanta on Nov. 17, 2016, on National Preemie Awareness Day.

So. Many. Caps. Photo courtesy of Northside Hospital Atlanta.

For the parents of little ones at Northside, it's a wonderful feeling to know those on the outside of the hospital are thinking about your family.

"It means a lot to us, because this is our second stint in the NICU," Doug Bunt, whose son, Matthew, was born on Nov. 12, 2016, told Good Morning America. "The fact this man is taking time out of his day to help the kids really means a lot to us."

Ed's story proves you can learn a new skill at any age — and make a big difference along the way.

"When someone appreciates something you do, that makes you feel good, naturally," said Ed, who plans on making about 30 hats a month moving forward to help fill the need. "I got a lot of enjoyment doing this, and now I’ve graduated to large caps. I’m doing caps for all my grandkids."

The seniors who lent a helping hand. Photo courtesy of Northside Hospital Atlanta.

Watch Ed's inspiring story from "Inside Edition" below: