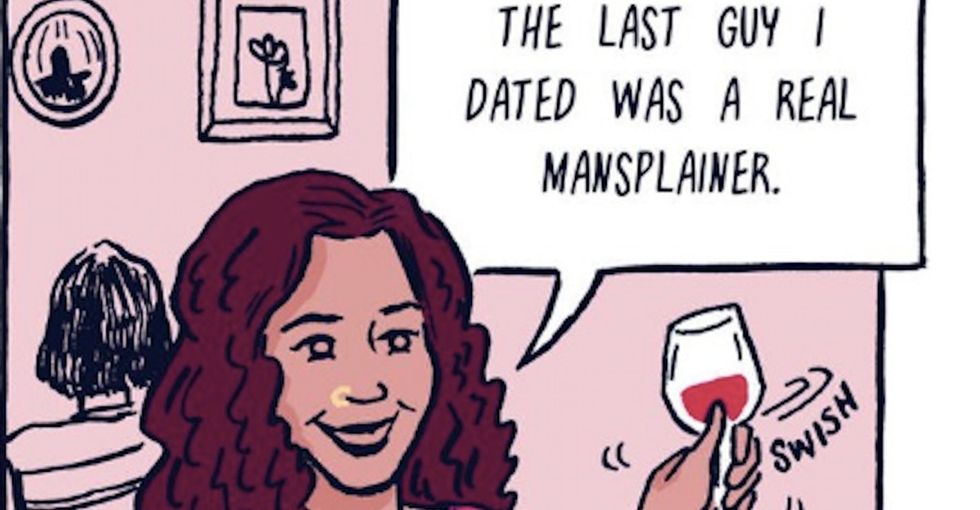 If you're living in 2018, you've probably encountered mansplaining — the word or, unfortunately, the real thing.

What is mansplaining? Are you doing it? And what do you do when you find yourself up against a mansplainer?

Luckily, the good folks over at The Nib are here with handy answers to all three — in delightful comic form.

"Mansplaining, Explained": "The last guy I dated was a real mansplainer."

"Mansplaining, Explained": "'Mansplainer.' I never get that word."

"Mansplaining, Explained": "Luckily, I've been on enough dates to prepare for this situation."

"Mansplaining, Explained": "It's a word that describes a pattern of behavior in our culture."

Mansplaining is a word that describes a pattern in our society of overlooking and dismissing women's knowledge, experiences, and voices.

Many men grow defensive when they're accused of mansplaining, but it's not a direct attack on any one individual. Rather, it describes a pervasive cultural trend that almost all women face throughout their lives.

Whether or not an individual man is guilty of mansplaining, the truth remains that it's near impossible for women and girls to make it through life without coming up against it.

It happens in classrooms, universities, and even in instances where a woman has demonstrably more experience and knowledge on a topic than men present.

"Mansplaining, Explained": "Patients are twice as likely to interrupt a female doctor."

Mansplaining can also be seen when women's voices are conspicuously absent from cultural conversations — especially when the topic pertains to gender or women's rights.

It's important to remember that mansplaining isn't the only type of cultural silencing that occurs in society.

All minorities find themselves silenced at some point or another by majority groups.

The best way to solve mansplaining and other oppressions is to make sure you're listening to all parties — and if the parties aren't present, question why and fix it.

"Mansplaining, Explained": "Who has a power and a platform in our society isn't just about gender."

"Mansplaining, Explained": Who's speaking? Whose voices are we missing?

This comic was originally published by The Nib and is reprinted here with permission.